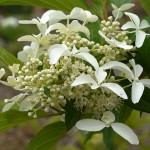 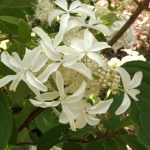 A new cultivar characterized by its panicles that are held nearly upright and rounded in form, its white star-shaped sterile flowers with sepals that are elliptic in shape and curl inward when mature, its bright green slightly rugose foliage, its continuous blooming habit from mid July to late September, and its outwardly arching plant habit. It arose as a naturally occurring branch mutation on an unnamed seedling of Hydrangea paniculata `Floribunda`.

UK Plant Finder: Not listed. (listed by Ashwood Nursery in 2008)