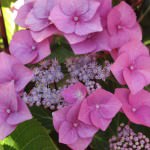 A new cultivar characterized by prominent dark purple-brown stems, dark green foliage and bright pink flowers. In combination these traits set `ZORRO` apart from all other existing varieties of Hydrangea known to the inventor.

It also has compact Growth and erect habit and dark green foliage.  It was discovered by the inventor at the inventor’s nursery in Reeuwijk, The Netherlands in October 2000 as a whole plant which had developed from a naturally occurring branch mutation of the variety Hydrangea macrophylla `Blaumeise`