The gates are now closed, completing a very unusual year which affected us volunteers somewhat but left the hydrangeas completely unaffected.  They were more worried about the late frost and early drought.  Over Winter we plan to plant out more of the paniculata collection and add more unusual and garden worthy macrophyllas.  There are a few other interesting hydrangeas that have come our way, so we’ll put those in the ground as well.  We volunteers will be in the garden in March 2021 to prepare the ground and the gates will be re-open in July. 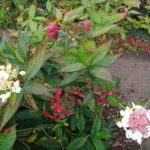 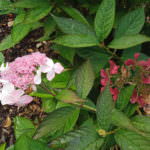 A hydrangea will usually throw out all its flowers all at once, bloom for a couple of months and then die.  This year we’ve noticed that many of the macrophyllas, in particular, have re-flowered later on in the season.  This gives us a chance to compare the antique tones of the late flowerings to the new more gentle tones of the early flowers.  The images attached are of Hydrangea serrata Grayswood, a veteran cultivar, with the old and new flower heads.  Very interesting and very garden worthy!