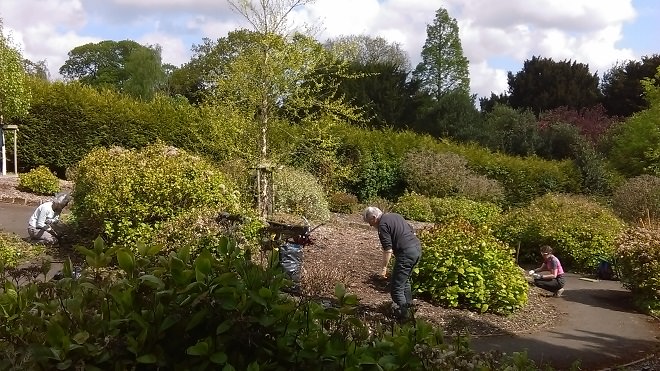 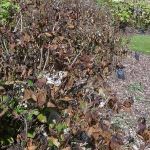 You’ll notice from the photo there’s been a lot of frost damage over the past 2 weeks. The tips of the leaves on the top of the plants look burnt.  We’ll leave these leaves on and by June you shouldn’t notice that anything has gone wrong.  We won’t know if some of the smaller plants have died for a couple of weeks, when they throw out new growth, but the layer of mulch put on over the Winter will protect most from harm.

On a sunnier note, we’ve been tidying up the outer garden in readiness for the Green Flag judging. Volunteers have put in 56 hours to tackle the deadheads, ivy, bindweed and wild garlic!  Many thanks!

We continue to liaise with other growers at home and abroad and have been promised the first plant of paniculata ‘Polestar’ from the nursery which has bred them. Volunteers are going to a nursery in North Wales to purchase some original hydrangeas found in Taiwan and Japan.  We’ve arranged to get cuttings from USA.

The mapping and labelling of the collection is going well and we should have most plants named by the opening of the walled garden in July.

You may notice that some plants have been moved. Our aim is to keep all the hydrangea paniculatas together for easier comparisons between them all.  It may not look it by we have plenty of spaces still.  Some of the older and larger hydrangeas in the outer garden have been cut back hard so we can get to the ivy that has grown into them.  They will survive and come back even stronger next year. 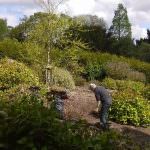